Hmmm... some of ths stuff is awesome, and some of it sucks ass. For the most part it's really unusual metal with lots of experimental areas and a progressive edge, though it's really not that technical at all. The drummer also handles synths, samples, and Chapman Stick, they use acoustic guitars and lush clean guitars, etc. But the singing sort of sounds kind of like a cheesy heavy alternative band (sorry) - it's really not bad, but generally clashes with the creativity of their music, and some of the songs have that groovy sort of rock edge to 'em (see "Missing Persons") that I can't stand. Of course, that same song has some Cynic ripoff riffs, some amazing drum fills, and an incredible prog rock solo that blazes all over the place... but that just makes the shitty parts all the more painful! Because it's like, "Okay, this band has the potential to fucking shred, so why are they wasting their time with this boring rocked out horseshit!?" Most of the songs are long and moderately paced compositions that are fairly laidback, but it doesn't bother me because the band harnesses a lot of atmosphere and power in their melodies and the way they tend to approach things. The recording is pretty good. It could stand to have a better mix, because the vocals are too dominant, but the actual tones sound great. I especially love the rhythm section's density and warmth. The guitar tones could use smoothing out, but I can live with it. Parts of the layout I love, parts of the layout I hate. I really like the band of abstract blue-ish photography on the outside of the package (mainly the subtlety of the front cover), but the reddish imagery looks a lot cheesier and clashes with the otherwise consistent color scheme. I also don't like any of the text because they use too many different fonts and font sizes so it looks jumbled, and it was a waste of space to repeat the tracklist inside the booklet along with useless thanks lists rather than including the lyrics. Fuck, I don't know. There's so much going on here... but the band isn't doing it for me. Parts of this disc totally blow my mind, and parts of it make me want to smack these guys around for pissing their talents down the drain. They need to throw out the bluesy rock shit, throw out the alternative rock shit, and focus on the intense atmospheres of their more unconventional tactics. Most all of the clean passages are incredible, the singing can be appropriate on rare occasions, the drumming is great... damn. Shit, even if they were just a pretty basic progressive rock/metal band they could pull that off very well... they just need to focus on what they're good at and develop that, shedding all the fat along the way. This is one of those rare bands that has a massive wealth of potential that could either blow minds or cave in on itself and go nowhere. 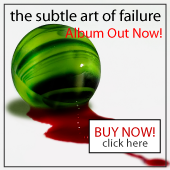 All content © Divided Sky Music, except where indicated. All rights reserved.

Send all questions, comments, hate mail, love letters and yeti to our webmaster